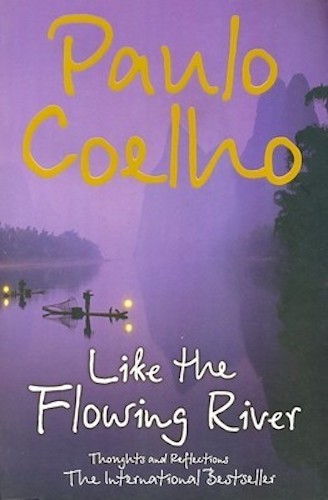 ‘Like the Flowing River ‘is a compilation of tales, opinions, short stories and ideas drawn from articles published by Brazilian writer Paulo in various international newspapers. Seven years of reflections, journeys and meetings: the revelation of a fascinating philosophy of life. A brilliant collection cleverly written with passion and humor. Coelho’s simple words and subtle philosophy encompass reflections on solitude, the art of love or the way to become an archer, to parables on man’s struggles and journey through life. His mission is to observe human beings; what they are and how they are, rather than what they want to be or pretend to be. Coelho’s writing is timeless: thoughts on books and libraries and belonging to a technological age sit alongside an awareness of the value of an ordinary pencil. Appealing to a wide audience, this is inspirational non-fiction from the one of the world’s greatest writers. Paulo Coelho is an enchanting storyteller, inspiring people all over the world to see beyond the ordinary and into the remarkable. He is considered one of the most influential authors of our times. Born in Rio de Janeiro (Brazil) in 1947, Paulo Coelho is the author of some of the most read titles of our time, such as The Pilgrimage or The Alchemist, the book which made him internationally famous. But also, Paulo Coelho has written many other books which have touched the hearts of people around the world. He is member of the Academy of Letters of Brazil since 2002 and Messenger of Peace by the United Nations since 2007. In 2009 he received the Guinness World Record for the most translated author for the same book (The Alchemist). Also, he is the writer with the highest number of followers in the social media (more than 20 million fans). *** “This path took me to many places and caused me to change countries more often than I changed shoes, as Bertolt Brecht used to say. The pages that follow contain accounts of some of my own experiences, stories other people have told me, and thoughts I’ve had while travelling down particular stretches of the river of my life.” LIKE THE FLOWING RIVER PAULO COELHO *** “‘Like the Flowing River’ gives us lots of food for thought.” – TV ENVIE MAGAZINE, FRANCE “‘Like the Flowing River’ presents Paulo Coelho’s most intimate and powerful reflections.” – SYDNEY MORNING HERALD, AUSTRALIA “Paulo Coelho takes us, in 101 stages, into a journey sometimes dreamt, sometimes lived, where we discover ‘The Other Side of the Tower of Babel’, ‘Norma and the Good Things’ or ‘Genghis Khan and his Falcon’. A real pleasure reading, enlightened by a wisdom that preaches nothing.” – BIBA, FRANCE “Coelho seduces once again the readers captivated by his writing.” – L’ÉCLAIR DES PYRENEES, FRANCE “Since ‘The Alchemist’, Paulo Coelho is constantly inviting readers to question their lives, to wonder about his choices and actions. With ‘Like the Flowing River’, he continues his personal legend helping you find yours.” – VIRGIN MAGAZINE “A delightful book that is above all an invitation to travel. Enjoy Coelho’s agile writing and his detailed analysis of the great joys and small troubles of everyday life. Gourmet words to peck with delight.” – BON WEEK CULTURE CLUB, FRANCE “These texts are above all an extraordinary voyage into the thinking of the world’s most widely-read writer.” – LE BIEN PUBLIQUE, FRANCE