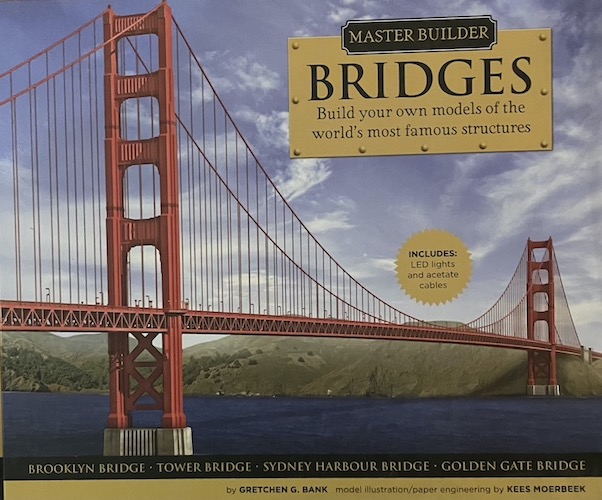 Cross these bridges when you come to them! Until you visit them in person, there’s no better way to experience the extraordinary architecture and construction of the world’s most prominent bridges, including New York’s Brooklyn Bridge, San Francisco’s Golden Gate Bridge, London’s Tower Bridge, and Australia’s Sydney Harbour Bridge than with this fascinating addition to the new Master Builders series. With easy-to-follow instructions, you won’t find any troubled waters here!

o Book includes a fascinating history and full-color photography of each featured bridge, making it a valuable reference for professional architects and amateur admirers alike.

o Want to buy the Brooklyn Bridge? Now you can have your own miniature version of one of America’s greatest structural icons.

o A golden opportunity awaits you as you span San Francisco’s breathtaking tourist attraction, which took over four years and $35 million to build.

o The London Bridge fell down a long time ago, but a bigger and better one still stands downstream-the Tower Bridge-and you can build your very own replica!

o Celebrate the 75th anniversary of the Sydney Harbour Bridge by erecting the world’s widest long-span bridge, which also happens to be the world’s largest steel-arch bridge.