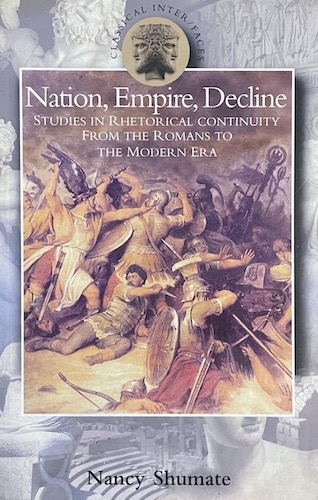 Nation, Empire, Decline: Studies in Rhetorical Continuity from the Romans to the Modern Era (Classical Inter/Faces)

The often overlapping discourses of nationalism and imperialism, along with related ideas of social decline, have been central in 19th- and 20th-century Anglo-European views of the world. This book offers four readings of Latin literary texts to show that the templates for these ‘modern’ discourses were forged in their essentials by the early Roman imperial period. Each chapter follows the relevant rhetorical thread in works of Horace, Tacitus or Juvenal, comparing their strategies with the defining structures of modern nationalist or colonialist discourses. General rhetorical principles can be discerned, remarkably persistent across time and circumstances. Classicists will find something new in an approach that systematically analyses the rhetorical strategies that underlie Roman prototypes of these discourses while demonstrating how closely later incarnations follow them.

Nation, Empire, Decline: Studies in Rhetorical Continuity from the Romans to the Modern Era (Classical Inter/Faces)