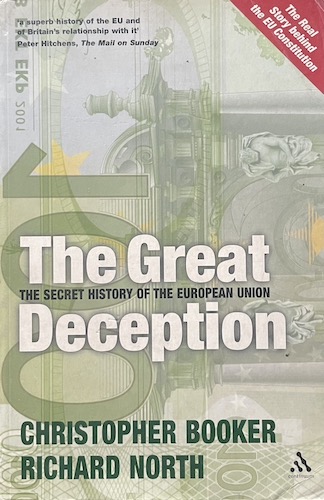 The Great Deception: A Secret History of the European Union

As the European Union moves next year towards adopting the constitution which will mark its final emergence as a “United States of Europe.” The Great Deception shows how the most ambitious political project of our time has, for more than 50 years, been based on a colossal confidence trick–the systematic concealment from the peoples of Europe of what the aim of this project has always been since its inception in the late 1940s. As it reveals for the first time the true story behind the long-term plan to build a politically united Europe, the authors show how all previous attempts to reconstruct the history of this project–whether written by Europhiles of Eurosceptics–have got it wrong, at almost every step along the way. With all the suspense of a detective story, drawing on thousands of books, paper and official documents, many of which have only become publicly available in the past few years, the book traces how a handful of determined visionaries set out more than half a century ago to weld the countries of Europe into a single political state. The Great Deception should immediately become a standard reference work for all students of politics. Yet so disturbing is the picture that emerges that, at a time when Britain’s future in the EU is a subject of national debate, it will also spark much wider concern.

The Great Deception: A Secret History of the European Union