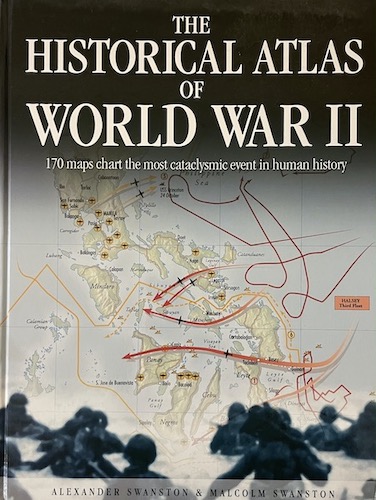 With realistic maps, detailed accounts, and vibrant illustrations, the book transports the reader to famous World War II battles. Using state-of-the-art technology, special microchips translated the contours of two-dimensional maps of battlefields into realistic renderings of actual landscapes. Illustrators then overlaid these maps with all of the information at their fingertips—troop movement, weapon deployment, terrain conditions, and weather. The book brings to bear all the other available details of each battle, including battle plans, troop formations, strikes and counter strikes, and troop strength. From this bird’s-eye vantage point, the reader is able to piece together the big picture of the six-year war and analyze the tactics and strategies at play. Historical Atlas of World War II also includes profiles of the commanders, outlining their abilities and backgrounds.

Coupled with hundreds of colorful illustrations, the book’s detailed maps and wealth of information put the reader in the shoes of a soldier at the D-Day assault on Omaha beach, the Battle of the Bulge, and the US dive-bomber attack on Japanese aircraft carriers. Prepare to see one of the most significant wars of the twentieth century as you’ve never seen it before.