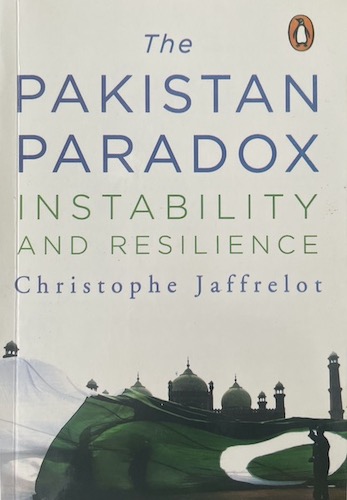 The Pakistan Paradox: Instability and Resilience (The Ceri Series in Comparative Politics and International Studies)

Pakistan was born as the creation of elite Urdu-speaking Muslims who sought to govern a state that would maintain their dominance. After rallying non-Urdu speaking leaders around him, Jinnah imposed a unitary definition of the new nation state that obliterated linguistic diversity. This centralisation – ‘justified’ by the Indian threat – fostered centrifugal forces that resulted in Bengali secessionism in 1971 and Baloch, as well as Mohajir, separatisms today.

Concentration of power in the hands of the establishment remained the norm, and while authoritarianism peaked under military rule, democracy failed to usher in reform, and the rule of law remained fragile at best under Zulfikar Bhutto and later Nawaz Sharif. While Jinnah and Ayub Khan regarded religion as a cultural marker, since their time the Islamists have gradually prevailed. They benefited from the support of General Zia, while others, including sectarian groups, cashed in on their struggle against the establishment to woo the disenfranchised.

Today, Pakistan faces existential challenges ranging from ethnic strife to Islamism, two sources of instability which hark back to elite domination. But the resilience of the country and its people, the resolve of the judiciary and hints of reform in the army may open a new and more stable chapter in its history.

The Pakistan Paradox: Instability and Resilience (The Ceri Series in Comparative Politics and International Studies)