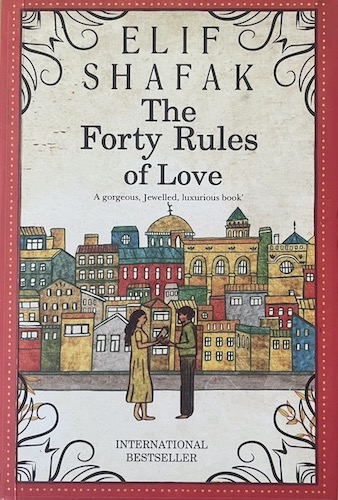 The Forty Rules of Love: A Novel of Rumi

The Forty Rules of Love unfolds two tantalizing parallel narratives—one contemporary and the other set in the thirteenth century, when Rumi encountered his spiritual mentor, the whirling dervish known as Shams of Tabriz—that together explore the enduring power of Rumi’s work.

Ella Rubenstein is forty years old and unhappily married when she takes a job as a reader for a literary agent. Her first assignment is to read and report on Sweet Blasphemy, a novel written by a man named Aziz Zahara. Ella is mesmerized by his tale of Shams’s search for Rumi and the dervish’s role in transforming the successful but unhappy cleric into a committed mystic, passionate poet, and advocate of love. She is also taken with Shams’s lessons, or rules, that offer insight into an ancient philosophy based on the unity of all people and religions, and the presence of love in each and every one of us. As she reads on, she realizes that Rumi’s story mir­rors her own and that Zahara—like Shams—has come to set her free.

The Forty Rules of Love: A Novel of Rumi